Listen close and I’ll tell you the tale
Of Danvers, the pirate Captain,
Of how he made his foes do his will,
And how thoroughly he tricked them.

He wore a silk coat, as black as night,
A plume on the brim of his hat.
His boots thumped on the deck of the ship,
And when he spoke, well, that was that.

His crew was a surly pack of dogs.
His first mate, one Mister Lendri.
Together they ruled the amber waves
In their ship, The Collar’d Lady.

For years, they terrorized hill and vale,
Burnt villages down to embers,
And as they hauled their loot out of town,
People would gasp, “It was Danvers!”

Finally one day, to stop the scourge,
The people struck him a bargain:
To Danvers they’d tithe from field and farm,
But ‘specially from the garden.

They stocked his ship’s hold with produce ripe.
His logic: “To stave off scurvy.”
His crew refused to argue with him,
They’d rather eat veg than go hungry.

This would have gone on for years, I’m told,
Except there was a mutiny,
Begun by a fateful night visit
To his captain by Mr. Lendri.

He’d entered the room without a knock,
A thing that was not his habit,
Discovered his captain quite hatless,
And learned Danvers was a Rabbit!

*extra Cudos if you "get" the Danvers reference without googling it. =:)
Posted by Stacy Christian at 8:40 AM 29 comments:

M saw these at her piano teacher's house and had to add them to our Fall decor To-Do list. 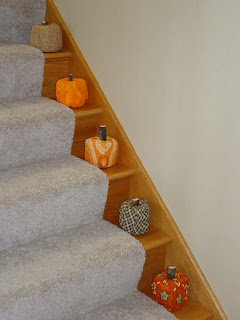 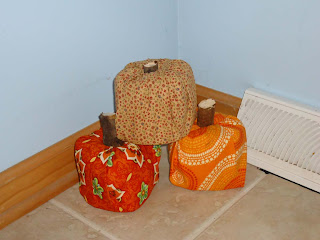 Instructions:
If I'm not careful, I'm going to get used to these Slacker Crafts. I don't know what's better~knowing that I can quickly pull these apart and just store the fabric until next year, or knowing exactly with what I'm decorating my house, right under everyone's noses.
Posted by Stacy Christian at 7:00 AM 33 comments:

Another idea we stole from Pinterest. The original instructions are HERE. 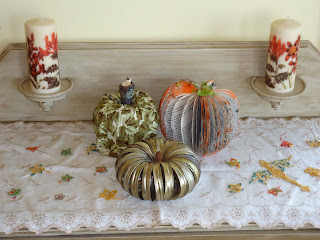 ~This seems like a perfect way to use those old blades, but it's more work. A sharp exacto works much better, but expect to dull the blade quickly.
~It works better to keep the book closed and use the pages that you've already cut as a guide. If you open the book to move the finished pages out of your way, be sure to use the template as your guide. Otherwise, there is a tendency for each layer to get smaller and smaller as you go.
~You can always trim up uneven edges once the basic shape is done. Unless you like the rough, messy look.
~I used a cheap ink pad to color the edges of the pages. I just fanned the closed book slightly and rubbed the ink pad along the edges from both directions. I don't have the patience to wait for paint to dry.
~Books with supple bindings work much better than books that crack apart as you bend them. If you have a small dowel that you can shape the binding around, it helps the pages spread more evenly. The pumpkin in the photo is the only one that we were able to get to look alright.
Posted by Stacy Christian at 7:00 AM 40 comments:

Email ThisBlogThis!Share to TwitterShare to FacebookShare to Pinterest
Labels: crafting

Our next super easy pumpkin craft comes from...well, all over the internet.

1. Wash and save as many gallon milk jugs as you like.
2. Paint the lids green.
3. Use a permanent black marker to draw faces on the jugs.
4. Fill with colored water. Our orange is 35 drops yellow, and 6 drops of red in each gallon of water.
5. Before displaying, drop an orange glow stick inside (admittedly, this was not very impressive. We're still tweaking the glowing part. Since electricity and water don't play well together...). 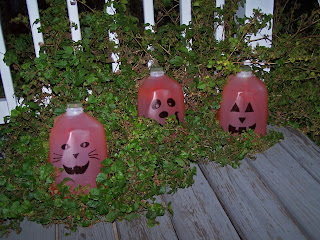 It has already occurred to M that we don't have to stick to orange. Purple and green would be cool too.
I love that these use recycled materials (mostly), are frost proof, won't rot and can be emptied on the garden when we're done with them. We found a 12 pack or orange glow sticks at Michael's for $3.
A local farm stand wanted $4.25 for a gallon sized pumpkin. That makes me love these even more.

Since there are no sharp objects involved, and messing up just means using the other side of the jug--or getting a new one--even a 2 year old (or 40 year old with no salvageable drawing skills) could make these.
Posted by Stacy Christian at 7:01 PM 29 comments:

M has decided that we need to make decorations for this fall. I sigh in resignation, but realize that she is right, too. Even though Autumn is my favorite time of year (at least until Spring comes), I have almost no embellishments for that season. The cinnamon broom that gave me migraines got chucked within days.

Seasonal crafts abound, but we're going to challenge ourselves to use items that we already have on hand, or are cheaper than dirt. And we're going to major on pumpkins this year, but buying real ones is out of the question.

Enter our first Fake Pumpkin project, and quite possibly the easiest craft idea on the planet (unless, of course, you have to crawl all the way to the back, under the basement stairs where the canning supplies are stored, like I did). It requires no special skills, equipment, or even crafting, for that matter. 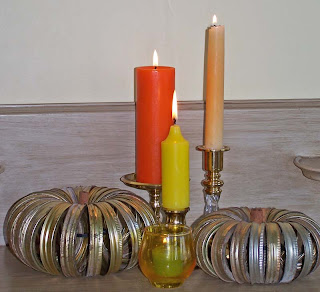 Zip tie old canning jar rings together and stick a cinnamon stick in the middle. Ta-Da! That's it. You could stuff a piece of burlap or fabric in with the stem for a leaf if you wanted to get fancy. We might add a bit from our bittersweet vine later. I should probably wash the rings at some point too.

I absolutely adore this idea and admit without remorse that I stole it from Pinterest. The original idea is posted here: Junkin' Pumpkin but she got the idea from here: Funky Junk Interiors
I may have to try the wreath another time.

We've already gathered some other fake pumpkin ideas and will be posting them as we get them made. As long as M doesn't force me to make any more candles, we're good.
Posted by Stacy Christian at 7:00 AM 29 comments: