Blame it on a need to compartmentalize every tidbit, but I have turned the lights on in another blog. Sit! Stay! Write!, while currently an echoing cavern, is intended to be primarily a writing blog.
I plan to furnish it with writing exercises, guest writers, resources and maybe even some original material thrown in now and again. Hope to see you there!

Avoiding the Laundry will remain the home of all the arts, crafts, carving, letterboxing, and sundry other messes we get ourselves into on a daily basis. I expect the post will come less frequently. You really have no one to blame but yourselves. You guys are the ones that keep encouraging me to write.
Posted by Stacy Christian at 1:16 PM 1 comment: Links to this post

My husband really loves me. I know this because he came home the other night bearing a gift of six new highlighters, each in a different electrifying color. He knows that I am agonizing over manuscript revisions and that red pens are so reminiscent of 4th grade math tests.

Even if you don't approach a story rewrite with your heart in your hand, the process is grueling. Yes, you have to deal with all of the pesky little weeds that crop up in your writing (sneaked or snuck?*). You also need to develop artistry. Make the words come alive and sing. For that, you have a plethora of technique and style books to lend a helping hand. Or nag you to death.

This is where I'm at now. I've spent so much time reading advice from others, I fear I am losing my own unique voice. If one more person tells me I must read Stephen King's On Writing, it's going to get ugly. Use right-branching sentences. Be poetic, but avoid annoying alliteration. Build tension in your dialogue, even if your characters are only talking about cake.

Don't get me wrong. I want to be teachable. It would be arrogant to think that I cannot learn from others and continue to hone my craft indefinitely.

However, at some point you have to put away your highlighters and trust your story. It has lived in the relative safety of your mind while you nurtured it. Its fluffy down has been replaced by sleek feathers. It's time to push it out of the nest and watch it fly.


*Apparently, either is acceptable, but "sneaked" makes you sound more polished.
Posted by Stacy Christian at 11:13 AM 4 comments: Links to this post 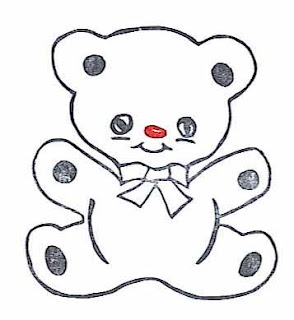 If you go down to the woods today (hic)
You're sure of a big surprise...

After the picnic, Teddy got a good look at himself and immediately checked into rehab.

Lesson for today: Do not carve stamps while watching Madagascar--especially when it is your last piece of PZ Kut.
No, this stamp is not going in the Etsy shop.

Posted by Stacy Christian at 7:00 AM 4 comments: Links to this post

Yesterday was our oldest daughter's 11th birthday. We try our best to treat each of the girls equally in every respect. My heart will never be able to look at J's birthday like any other birthday, however. I cannot help but remember sitting in the NICU and watching her crash over and over again after the doctors had done everything humanly possible to extend the limits of her birth.
Last night we watched her and her sister standing at the fridge, laughing and playing with the magnetic poetry she had just opened. The fierce joy of that moment cannot be described. I only know it was possible because of God's powerful grace.
Yes, I think her birthday will always be different.

This year's party is different in another way too. We couldn't get a single idea out of her. Her only response was "maybe you could surprise me." All of her presents were a success last night, so that's a relief. I hope our theme for the family party will pass muster as well. (Now that the party is over, I can tell you that it did.)

She loves bats. Do you know how hard it is to find bats during February when all the stores are selling hearts, kittens, and roses? Even if this were October, the theme is not Halloween or Goth bats. It's just cute, happy bats. So we made our own. 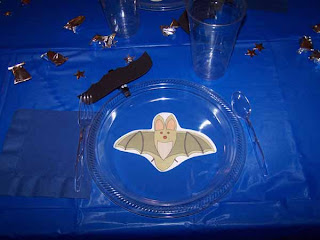 We photo shopped clip art bats and used spray adhesive to attach them to the bottom of clear plates. The table clothes were dark blue and we scattered silver stars on them to mimic the night sky. 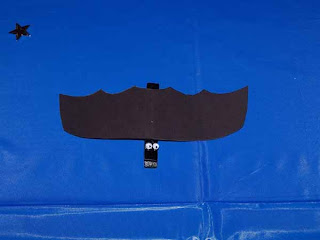 We made little clothespin bats to clip on the side of the plates as a party favor. By the end of the evening, people were wearing them on their clothes, hair and jewelry. 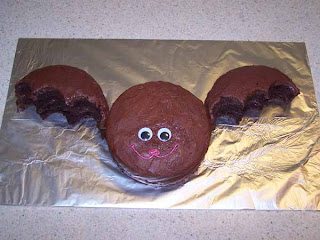 I am not and never will be a professional cake decorator, but here was my attempt at creating a bat cake. J was pleased, and that is all that counts. I used the Hershey's Perfectly Chocolate Cake and frosting recipes, so it tasted fantastic regardless of how it looked.
Posted by Stacy Christian at 7:00 AM 4 comments: Links to this post 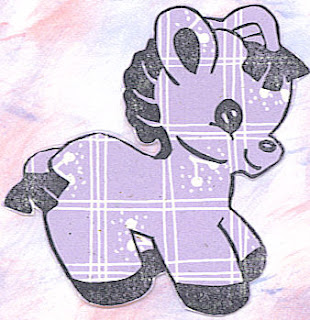 Ride a cock horse to Banbury Cross
To see a fine lady upon a white horse
With rings on her fingers and bells on her toes
She shall have music wherever she goes
Posted by Stacy Christian at 7:00 AM 2 comments: Links to this post

The first of the stamps designed after the mobile characters: 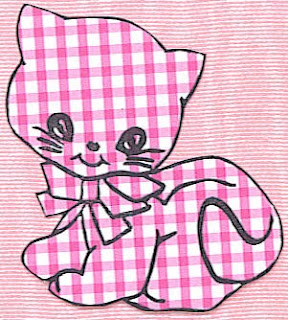 **all of these stamps from the mobile will be listed in my Etsy store.
Posted by Stacy Christian at 7:00 AM 2 comments: Links to this post

My letterboxing buddy turns three today. In honor of this auspicious occasion, we dressed him up (hence the menacing glower) and took silly pictures. Isn't that what dogs are for? 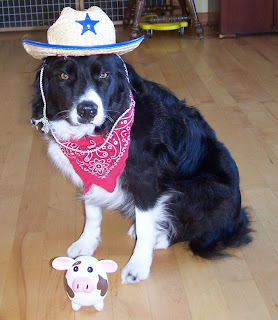 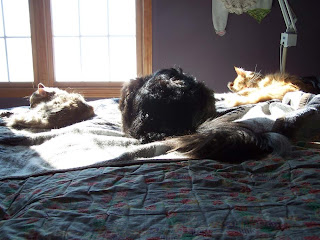 If you can't herd them, join them in a nap.
Posted by Stacy Christian at 10:25 AM 4 comments: Links to this post

The rush of remembrance that overtakes you when you first see some long forgotten object or person from your past has visited several times in the last couple of weeks. When my brothers were here, they cleaned out several attic closets. Old books, GI Joes and other keepsakes brought back plenty of wonderful memories, and a few embarrassing ones as well (like the bumble bee that I whacked my brother with, giving him a gash that required stitches). 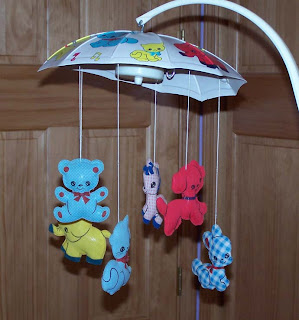 They found my crib mobile too. I don't specifically remember it hanging over my bed; but the very familiarness of it makes me feel fuzzy inside. I'm not sure what I'm going to do with it in the long run; but for now, I am working on turning the characters into rubber stamps. Now there's a big surprise, huh? 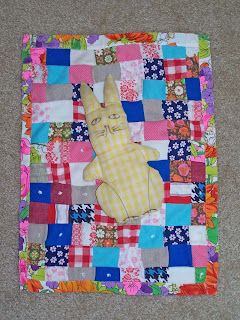 Also found was my very first stuffed animal; one that I received on the day I was born. No, I don't remember that either; but I do remember him. He needs a bath and a new bow. 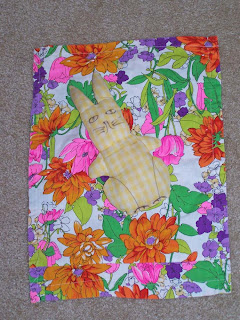 Can you tell I was born in the 70s? I didn't play with dolls, but I did all of the usual doll things with stuffed animals. The mini quilt was part of that play for a long time. 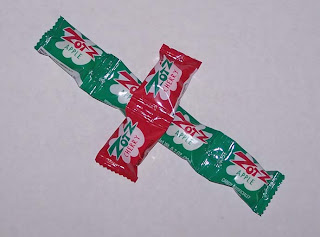 I was shopping for my almost 11yo's bday last night and came across Zotz. These were some of my favorite candies as a kid. I didn't know they still made them. Sour candies are pretty common place now, but I don't remember many (other than lemon drops) being available then. Mom would send me to the grocery store on my bike and I could stop at Basinger Drugs on the way home. They had what seemed like the biggest candy aisle on the planet. Zotz were almost always on the menu. It was fun to give them to unsuspecting friends because they foam in your mouth when you get to the center.

Your turn. What were some of your favorites from childhood?
Posted by Stacy Christian at 8:47 AM 7 comments: Links to this post

Email ThisBlogThis!Share to TwitterShare to FacebookShare to Pinterest
Labels: memories

As I make writing a daily part of my life once again, I am painfully aware that my casual speech habits have drifted into sludge filled waters. Living near Chi-cah-go (say the "a" like it is in "bad") doesn't help.
How to know when it is time for an English Grammar refresher course:
My newest best friends are Grammar Book and The Elements of Style by Strunk and White (that would be the E. B. White of Charlotte's Web). Both of them serve to remind me that college writing courses were ever so long ago, as well as to provide that little nudge that my brain needs more frequently than I want to admit.
Both relief and a sense of chagrin come with the discovery that Microsoft Word is smarter than me. Did you know that many word processor programs will not only edit for grammar and spelling, but will also alert you when you start a sentence with "And" or "But", write in passive voice, use gender specific terms, split infinitives, use contractions, cliches, or too many successive nouns or prepositional phrases? It can also run a readability scan and tell you at what grade level your writing can be understood. While it is a great tool to help improve your writing, it is also a little bit irritating to have the computer correct you that much. Humph.

Bonus point if you find the mistakes in this post.
Posted by Stacy Christian at 12:31 PM 4 comments: Links to this post

Another trip to Princeton for the February Box of the Month yesterday and here is our picture: 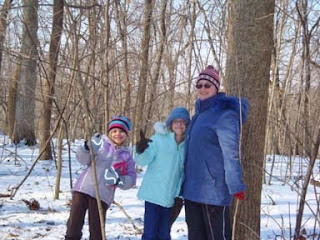 This box was absolutely delightful. We stood there in the woods and read the story out loud to the snow and the two red tailed hawks in a nearby tree. For the rest of the day, we repeated a line from the story, just to be silly. Great attention to detail makes for a fantastic letterbox presentation.

Cant' wait till next month!
Posted by Stacy Christian at 10:40 AM 2 comments: Links to this post

Email ThisBlogThis!Share to TwitterShare to FacebookShare to Pinterest
Labels: letterboxing

After a long absence from Etsy, I have reactivated my shop, but with some significant changes. All of the items in the bead and jewelry categories have been reduced in price to the point that you could not go out and buy the supplies cheaper. Also, I have decided that ALL of the proceeds will be donated to Compassion International for relief efforts in Haiti.

Tomorrow I will be listing the Sweet Tarts embroidery piece that I featured yesterday, but I am still praying about the price.

I have many items still to list, but it takes time. I am hoping that the money raised will be a blessing to others. God has so richly given to us and we "need" nothing else. I am excited to see what He will do with this.

Nitrocat's Shop on Etsy
Posted by Stacy Christian at 7:00 AM 3 comments: Links to this post

Email ThisBlogThis!Share to TwitterShare to FacebookShare to Pinterest
Labels: etsy

Sweet Tarts--Project of the Week

Just in time for Valentine's Day: 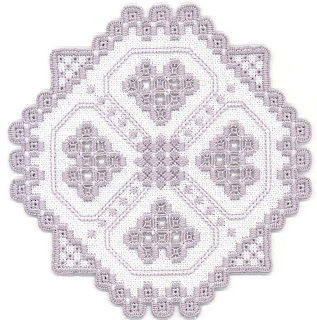 Now that Christmas gifts are behind me, I have no idea what I'm going to do with this piece. I'll either sell it on Etsy or stash it for a birthday present. If I can part with it, that is.

*note: I have decided to sell this piece on Etsy for charity--more details tomorrow.
Posted by Stacy Christian at 7:00 AM 3 comments: Links to this post